Same time tomorrow. A step is a dance, it is also a procession

The exhibition ‘Same time tomorrow. A step is a dance, it is also a procession’ shows the works of four artists (Heimo Lattner (A/D), Jaime Lutzo (US), Günter Puller (A), Judith Raum (D)) who employ research and observation techniques in their practices and, while their individual approaches to the material explored differ tremendously, all four use forms of documentation as their starting point. Ranging from historical, political, economic and cultural researches to critical questionings of current affairs, the show explores the duality of the practice led inquiry, where the art making process itself is also an essential element that is being documented and exposed.

Judith Raum’s installation L’Inspecteur des Cultures (2012) is based on research on the "Bagdadbahn“, a mammoth plan for an Anatolian railway that would connect the oilfields of Baghdad to Europe. Not only the German steel industry, but also dozens of other companies and initiatives benefited from the massive construction project and the resulting accessibility of the natural resources and markets of Anatolia. For example, German agricultural engineers ('Inspecteurs des Cultures') were dispatched to Anatolia in order to inspect and monitor the usage of land and, most importantly, ensure profitability.

Raum eschews the authoritative, sovereign language used in official documentations and correspondences she found in German, British and Turkish archives, and juxtaposes it with makeshift structures and haphazardly instances that marked the everyday life conditions of the nomad railway workers. While she also unearthed evidence of such instances in archival material, they weren’t made for the public. She subverts the gaze to the random objects tied with strings and used as weights with which Bavarian home-weavers equalized their looms, the tears and knots of the tents where the workers slept, or even provisional bridges built along the railroad that seem like a precarious balancing act, and echoes them in a mixed-media installation. The hermetic system of power, colonial sentiments and fantasies of market control, which the Bagdadbahn project reflects, are countered with the human, the fragile and the absurd.
The installation traces the artistic process in conjunction with the process of inquiry into alternative presentations of historical and archival documentation. Different fragments show various stages in the exploration of the work, while the fabrics themselves reveal a reflection on the medium of painting – Echoing patterns deciphered in the Bavarian textiles, the hand printed fabrics evoke both the sense of a product available “by the meter” as well as a canvas invested with artistic value. 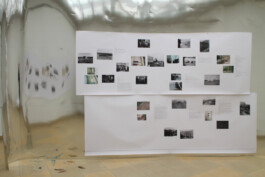 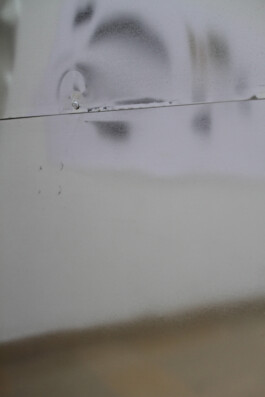 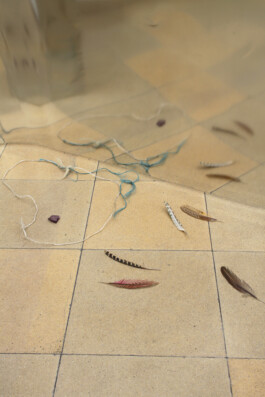 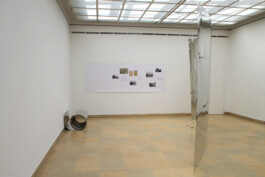 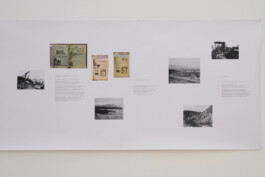 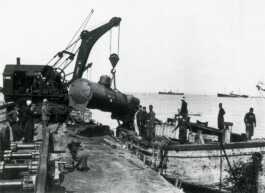 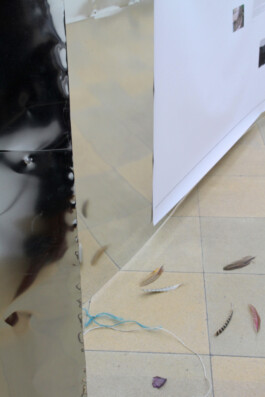 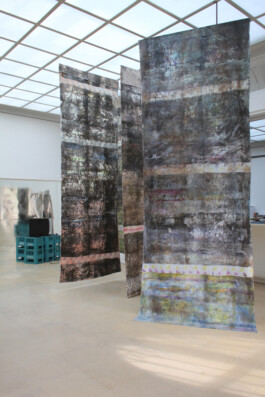 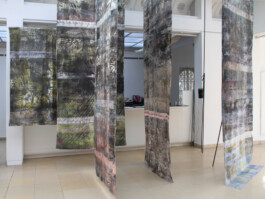