The installation forms part of the exhibition “The Futureless Memory” at Kunsthaus Hamburg. It intertwines various moments from the life of textile designer Otti Berger. Judith Raum chose large-scale lattice tulle as the main material, referring to a working material of the designer that dates back to Berger's time as a Bauhaus graduate. Following her studies, Berger successfully designed fabrics for European interior designers. Her career was abruptly ended by the Nazis, and she failed in her attempt to emigrate. She was murdered in Auschwitz in 1941. In her contribution to Otti Berger, Judith Raum combines the existential struggle of the artist for a prospect in life with the struggle for artistic expression.

Otti Berger (*1898 Zmajevac – Auschwitz 1944) was trained as a textile designer at the Bauhaus in Dessau. From 1932 she had her own studio for fabrics in Berlin, where she designed innovative functional textiles such as curtain fabrics, upholstery fabrics, and wall coverings. Berger formed her artistic attitude in exchange with the ideals of the Neues Bauen. Without losing sight of the latest technical possibilities of the textile industry, she initially forced her experiments on the handloom, which led to fabrics of visual and tactile refinement that simultaneously insisted upon simplicity and functional performance.

As a Jew, Berger was refused admission to the Reichskammer der Künste (National Chamber of Arts) in Berlin in 1935, and was thus prohibited from practicing her profession. From 1937 onwards, she tried to gain a professional foothold in England through the local network of Bauhaus graduates, but was unable to establish reliable business contacts. Her attempt to resettle was complicated by the fact that she was almost deaf. For family reasons, Berger went to Yugoslavia, her region of origin, in 1938, where she was retained when the Second World War broke out. Her planned exile to the USA – as a teacher of weaving to László Moholy-Nagy’s New Bauhaus Chicago, and to her successfully emigrated partner, the urban planner Ludwig Hilberseimer, who was connected to Mies van der Rohe in Chicago – failed tragically. Otti Berger was deported with her family and murdered in Auschwitz.

Singular letters from Otti Berger to Ludwig Hilberseimer, Ise and Walter Gropius and other friends, such as the art historian and critic of National Socialist ideology Alexander Dorner (whose emigration was also successful), dating until 1941 have been preserved. Some of them are reproduced verbatim in the video projections that are part of the installation. They convey the reality of Berger’s failed exile, which had a profound influence on the relationship to her own production. While the unknown country remains forever barred to her as a new home, it is the inner unknown to which she resolutely opens herself in her artistic processes in the seclusion of her Yugoslavian isolation. 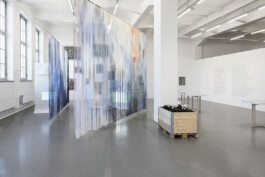 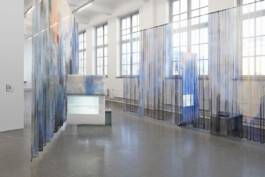