A lecture performance on activating resources.

Is it possible to imagine an alternative inventory of the library, a whole different set of books and artistic positions behind them? If the collection had been started at another place or in cooperation with different persons, what would it look like? Which of the positions and references in the collection mirrored particularly ‚Western’ perspectives – if something like that exists – and how would it be possible to supplement or challenge / provoke them?

How to appropriate agency in reading and mediating a history of contemporary art?

The Contemporary Arts Library Prishtina/Berlin originates in specific circumstances and with ties to certain art institutions and art circles in Frankfurt/Main, Germany. People from the art world were asked to donate two books which they thought to be essential for contemporary artistic practice and discourse.

The result of this is a library mainly consisting of names, artistic practices and art theoretical positions that come from the so-called ‚West’ (mainly from Western Europe and the United States) and which have become known via Western art magazines, art fairs or exhibitions. Even if chance was a constituting factor in the formation of the collection, this chance was never total, instead the choice of books was surely affected by the network with which we ourselves were already in contact on an institutional and a personal level. What also became visible were certain forces establishing a specific canon of what was considered cool in current discourses on art.

Sometimes, the same book was given to us two times, each time by a different person. 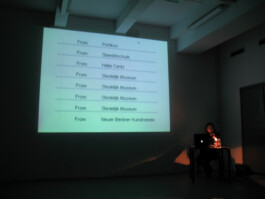 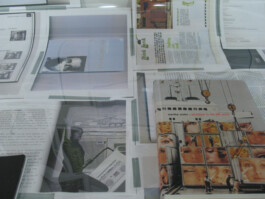